ARC Review: The Backstagers and the Ghost Light by Andy Mientus 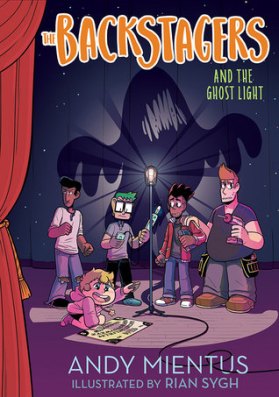 The stage crew at St. Genesius Prep—or Backstagers, as they like to call themselves—are ready for whatever the theater world can throw their way: the madness of tech week, inevitable prop malfunctions, and all the paranormal activity that goes on behind the scenes. Luckily Jory, Hunter, Sasha, Beckett, and Aziz are up for the job!

But lately, someone—or something—seems set on ruining their production of Phantasm. It all started when an actor brought a Spirit Board to the cast party, and the ghost light blew out. Every good theater kid knows that a ghost light must be left on to keep ghosts from moving in the shadows of an empty theater. To figure out what’s haunting the theater and save the show, the Backstagers will have to use their smarts, bravery, and a little bit of magic!

Disclaimer: I received an eARC of this book in exchange for an honest review. Thanks to Netgalley.

The Backstagers and the Ghost Light is the first in a middle grade series based on The Backstagers comics. I haven’t read the comics, although I can assure you I absolutely want to now! (The illustrations are from the same illustrator as the comics, Ryan Sygh, and they’re delightful.) This book became known to me because the author is Andy Mientus, a musical theater actor I’m a fan of (he was in Deaf West’s Spring Awakening, among other things) both for his talent and his openness and advocacy about bisexuality. Needless to say, this theater nerd (and backstager; I do props!) was very excited to get an ARC of this, read it in just a day over the summer, and now that it’s out in the world I can talk about it!

As someone who had not read the comics, I could tell this book is a sequel to them. (The ending of this book also makes it clear there will be a series.) There is an explanation of a recent event that must have been from the comics, and I think it’s explained fairly well. What I didn’t know going into this and you definitely should is that the world of the series is not just quirky, but full-out fantasy. Those marvelous descriptions of the backstage isn’t just figurative language–the backstage actually connects to every other backstage, which is really cool! Plus, as the title indicates, this is blended with theater lore that adds another level to it, and there’s a new character in the form of a teen witch.

The characters are all endearing (and the illustrations help) with their own quirks, skills, and desires, and they’re all good friends. Two of the boys are in a happy relationship and deal with a lot of important and realistic feelings about responsibility and adjusting–one of them, Jory, has recently moved and I really related to his description of visiting his hometown again. Also, one of the boys is subtly indicated to be trans and at least one other is a person of color.

It is a little strange for a middle grade (prose) book to focus on high schoolers which wouldn’t seem as strange in comic form, but the illustrations and the alternate universe the book takes place lends it a playful feel that works. I say “alternate universe” because there are many musical theater references throughout this book, but they are all slightly altered in a humorous way to make any theater kid laugh. Lease? Les Terribles? Amazing.

This is a book for every theater kid that takes great joy with theater mythos, fantasy, and the friendships backstagers form when working on a show. I look forward to reading the rest of the series as it comes out!