Review/Discussion: My Year in the Middle by Lila Quintero Weaver 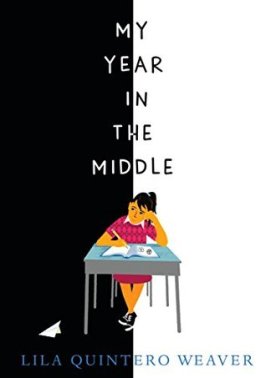 In a racially polarized classroom in 1970 Alabama, Lu’s talent for running track makes her a new best friend — and tests her mettle as she navigates the school’s social cliques.

Miss Garrett’s classroom is like every other at our school. White kids sit on one side and black kids on the other. I’m one of the few middle-rowers who split the difference.

Sixth-grader Lu Olivera just wants to keep her head down and get along with everyone in her class. Trouble is, Lu’s old friends have been changing lately — acting boy crazy and making snide remarks about Lu’s newfound talent for running track. Lu’s secret hope for a new friend is fellow runner Belinda Gresham, but in 1970 Red Grove, Alabama, blacks and whites don’t mix. As segregationist ex-governor George Wallace ramps up his campaign against the current governor, Albert Brewer, growing tensions in the state — and in the classroom — mean that Lu can’t stay neutral about the racial divide at school. Will she find the gumption to stand up for what’s right and to choose friends who do the same?

Disclaimer: I was provided an eARC in exchange for an honest review. Thanks to Netgalley.

My Year in the Middle is a new middle grade novel set in a fictional Alabama town during the 1970s governor primary race featuring known racist and segregationist George Wallace. Lu’s family immigrated to the area from Argentina when she was young, like the author herself. Her school is now integrated, but in every class the white kids sit to one side, the black kids sit on the other, and Lu and other students–including the cute son of an anti-racist pastor, Sam–sit in the middle to show their solidarity. In this tension-filled environment where many of her former white friends are drifting away, planning to go to an all-white private school, Lu trains to win a race on field-day and her running buddy and new friend is a black girl.

Weaver illustrates the time period well, from music and fashion, to Lu’s vibrant voice filled with the cliches of the time, to microaggressions and more blatantly stated racist and sexist attitudes by adults and even fellow students. And yet, the comparison to attitudes of today are not far. Students today are most likely to socialize with those of their own race, and private schools and other options create the “white flight” we see in this novel. At one point, Lu attends a Wallace rally because she was promised a cakewalk and is horrified at the candidate’s speech where he calls his opponent by an offensive nickname and talks an awful lot about, well, making Alabama great again.

I found it interesting how Lu classifies herself as white, although a “foreigner,” because today the United States has very different attitudes toward Latinx people, many of which are sadly not positive. Lu does face some of this, but it’s also demonstrated that many don’t see her ethnicity and read her as white–her gym teacher is surprised to discover she speaks Spanish, and she knows adults seeing her talking with a black boy will think she is threatened. Mostly, her conflict about speaking up comes in part from her mother’s warning that people don’t like when foreigners get involved. Still, the concept of “the middle” applies to her own identity, and this was such a unique perspective to read from.

And yet, as a pivotal moment late in the novel demonstrates, being in the middle isn’t enough. Lu discovers she has to stand up and speak out for what’s right or justice won’t happen. She could avoid humiliation and unpopularity if she aligns herself with the privilege of the white students (something marginalized ethnicities have done in the history of America), but she doesn’t, despite how difficult speaking up can be. There is a LOT to think about here, and I kept reflecting on how this would be a fantastic book to teach with all the real-world connections.

The politics in this book come organically and very much through the eyes of a sixth-grader who is also occupied with school, friends, a crush, and sports. Interactions with her peers–especially with black students she connects with over common interests in running and music–are political and stir up tension just by existing. Her older sister is an intern for the candidate running against Wallace, she has to pay attention to the race for her social studies class, and the parents around her talk about it. Her scope of the election relates to how the it can impact her sixth-grade world…that a lot of white people really don’t want her black friends to go to school with her.

AND there is another major plot thread throughout the book that I loved! Lu, inspired by Olympic Gold Medalist Madeline Manning, desperately wants to win a long-distance race on field day and convince her parents to allow her to run on a track team being formed for the high school, even though their cultural values have led them to believe she should focus only on school and that it isn’t proper for girls to play sports. Plus, the older bully on the bus keeps talking about how his cousin is third in the state and will beat her. Lu pursues this goal with encouragement from her gym teacher and lengthy training sessions, first with her new friend, Belinda, whom she bonded with over their love for running in gym class, and later with her father’s and sister’s help. I loved that this emphasized all the hard work and small steps that go into accomplishing a larger goal, and the climactic race is worth it.

I do have a couple of minor quibbles with this book, however. An essay, a poem, and a song play major roles, and I would have loved to see these actually included in the text to give more insight into the characters. For instance, I wasn’t entirely sure what angle Lu took on her report on the Wallace rally and I’m still not sure, especially since essays today–even at the sixth-grade level–are much more than a recounting of events that I suspect was popular back in the 1970s. I also was a little conflicted of the treatment of Lu’s friend Abigail in the story…there’s an acknowledgement of the (white) privileges of fashion/glamor, and her tale is certainly one of conformity that sadly includes racism, but I wasn’t sure how to untangle these observations in a way that didn’t look down on her interest in boys and fashion. Perhaps because Lu also has a big crush? I think she just came across as a character without much depth and that certainly relates to her path to conformity, but it’s all tangled up in a “silly” crush and so on. Lu is wise enough to see that Abigail likes him more than he likes her, and I don’t blame her for being upset, but it veered pretty close to some anti-teen-girl tropes. Perhaps something else to talk about with readers. The knowledge and worldliness Lu has in comparison is definitely because of her different experience with racism and inability to fully benefit from white privilege, while Abigail can cast that aside and come away from the Wallace rally only caring about the cakewalk experience. Yeah, the more I think about this, the more her character development and lack of shades makes sense, and boys and fashion should be interpreted as an extension of that, rather than evidence for it.

My Year in the Middle is a book that I think all upper elementary/middle (and beyond!) students and teachers should read for its important messages, historical account, and wonderful protagonist!