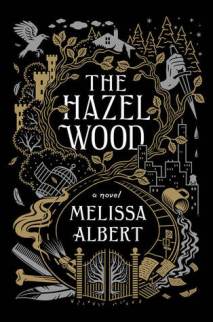 Seventeen-year-old Alice and her mother have spent most of Alice’s life on the road, always a step ahead of the uncanny bad luck biting at their heels. But when Alice’s grandmother, the reclusive author of a cult-classic book of pitch-dark fairy tales, dies alone on her estate, the Hazel Wood, Alice learns how bad her luck can really get: Her mother is stolen away―by a figure who claims to come from the Hinterland, the cruel supernatural world where her grandmother’s stories are set. Alice’s only lead is the message her mother left behind: “Stay away from the Hazel Wood.”

Alice has long steered clear of her grandmother’s cultish fans. But now she has no choice but to ally with classmate Ellery Finch, a Hinterland superfan who may have his own reasons for wanting to help her. To retrieve her mother, Alice must venture first to the Hazel Wood, then into the world where her grandmother’s tales began―and where she might find out how her own story went so wrong.

Well, I’m back. I had a LOT of reading to do for school and also have been sick, so I wasn’t able to read much else. Now it’s spring break, and I finally finished my first ARC of 2018, so here we go! Disclaimer: I received an eARC for Netgalley in exchange for an honest review.

I think The Hazel Wood is a book that works for me in pieces, but not as a whole. There are about three parts to this novel. The first, which I found quite gripping, was a combination of Alice’s backstory with her mysterious fairy-tale bestseller grandma and mysterious happenings to her, culminating in the disappearance of her mother to the “Hinterland,” the place from the fairy tales. Then she goes to Ellery Finch, a rich boy from her school who knows about her grandmother and even managed to read a copy of the book once, and they try to track down the Hinterland while avoiding supernatural forces stopping them. This section dragged more for me. And finally, as you might expect, they reach this fantasy world.

I won’t spoil, but something did happen in between the second and third sections described above that made me lose investment in the story because it came across as negating a lot of what the novel had put time and effort into, making a good chunk of the book inessential for a cheap plot twist. Of course, it’s not all as it seems, but I’m not sure I found the conclusion is all that satisfying, either.

Otherwise, the fairy-tale world section was enchanting, disturbing, and definitely the most interesting, and even though it seems to come in at a bizarre place in the novel, it’s definitely the resolution. Of course, that means there’s a lot of exposition to swallow. That said, there were some good twists, great descriptions, and really interesting metafictional aspects that made me like the concept (the mysterious book of fairy-tales) even more than I did at the beginning.

Albert’s overall writing style was great: there were plenty of great turns-of-phrases, figurative language, creepy sequences, and pop-culture references. Like others, I found Alice frustrating, but the plot ended up explaining some of this so I can’t really complain, I suppose, though I really wish I got to see her develop more relationships. I rather liked the ending…I understand there is going to be a sequel now (perhaps a trilogy?), but it’s written as a stand-alone and I think it can be read that way because it wraps up neatly. I frankly don’t think this is a series I’m interested in reading more of (which is no surprise if you know my lack of interest in series).