Well, it turns out getting a camera is more complicated than I thought, so my foray into videos has come to a standstill. So, I return to some traditional blogging to tell you about two October releases that I’d been looking forward to (and lived up to my expectations)! (Also, yes, this is quite late. I failed at working blogging into my schedule this semester, but now I have more ideas and creativity that things are looking better.)

One of the reasons why I love A.S. King’s novels so much is that they feel a bit like stumbling across a file folder of collected information and piecing it all together. In Still Life with Tornado, we mostly follow the perspective of sixteen-year-old Sarah as she stops attending school and runs into versions of herself from the past and future. Slipped throughout this narrative are excerpts from a family vacation seven years previously–which led to a rift between Sarah’s brother and the rest of the family and which Sarah doesn’t quite remember–and diary-like narratives from Sarah’s mother about her relationship with her husband. The different story threads weave together to reveal the troubles in Sarah’s family as Sarah herself learns, bringing about an inevitable confrontation.

I don’t think Still Life with Tornado is one of my favorite of King’s novels, but it was a ride that kept me engaged and gave me plenty to think about. The cycle of abuse and its effects on everyone involved is explored in a heartbreakingly realistic way. Sarah may first come across as a little annoying, as she’s so disdainful toward anything that isn’t “original” and is worked up over something that she is so embarassed of being a small issue that she doesn’t tell us for a while, but this is only the surface level of her character. She’s from a troubled household with repressed memories and the career path she loves is in danger. She’s lost, and we come to understand her as she lets some of her guard down. This is important. Kids may seem “difficult,” but what are they burying inside? So King unabashadly takes on a seemingly frustrating character to reveal her true self that she has been hiding from even herself, and every page is worth it. 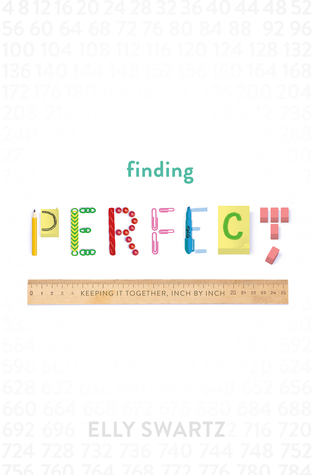 One of my most anticipated middle grade books of the year, Finding Perfect follows a 12-year-old girl named Molly as her OCD worsens while she concocts a plan for her mother (who left for Canada after a separate) to come and visit her if she wins a poetry slam competition.

As evidenced by the acknowledgements, Swartz did a lot of research when writing this novel, and that shows. It’s very informative,  immersing the reader in Molly’s world of even numbers divisible by 4, right sides, and more. It’s important in this society where “I’m so OCD” is a thing kids (and adults!) say WAY too much that we see Molly organizing her glass figurines and using perfect pencils alongside the profound anxiety she feels concerning her brother’s health when that order is disrupted, as well as her other obsessions. I really do hope that realistic portrayals of OCD like this help kids understand what it REALLY is. Finding Perfect even touches on the treatment Molly recieves once diagnosed, though I do not recall the option/addition/aspect (because it’s rarely used alone) of medication being mentioned.

Another thing I really liked: Molly goes to the Internet for answers when she is worried about her compulsions, as all curious kids do in the 21st century.

But Finding Perfect isn’t just about OCD. Molly’s relationship with her best friend, Hannah, stumbles at times, as does her relationships with her father and her siblings. She has to confront her optimistic image of her mother, too. Family, friends, and personal identity–it all comes together here, as they do for so many adolescents as they figure out who they are and where they belong in the world. It’s lovely.

2 thoughts on “Reviews: Still Life with Tornado and Finding Perfect”